For a week in July 2019, SentryWorld® and Stevens Point, Wisconsin, bustled with golfers, coaches, families, and spectators in town for the 71st U.S. Girls’ Junior Championship. Through months of planning and hard work, we collaborated with the USGA, the city of Stevens Point, and the Stevens Point Area Convention & Visitors Bureau to prepare for this prestigious championship.

While this wasn’t the first USGA championship held at SentryWorld, it was a first for this championship and the first event of this caliber since we completed course upgrades. We all were eager to show how well our renovated parkland course would play—and how welcoming we knew central Wisconsin residents would be.

Our hometown’s enthusiasm for the championship showed up first in volunteer turnout. The USGA said we’d need at least 200 volunteers to help run the event—more than double that number signed up. 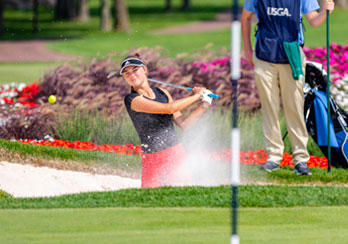 After severe storms struck the area the night before and morning of the first practice rounds, dozens more people showed up at the course to help clear debris. When we learned widespread power outages left many players and their families without hot water at their hotels, we gave them access to the shower facilities at our Sentry® home office across the street from SentryWorld.

“We greatly appreciate Sentry’s generosity in acknowledging the challenges our field is facing and reacting to overcome those challenges by opening their doors to us,” wrote Tracy Parsons, USGA director of championships, the weekend before competition got underway. “This goes above and beyond so that players, their families, and our members can be comfortable. Their commitment to this championship is unparalleled.”

With help from the volunteers and round-the-clock attention from our maintenance team, the course was in top shape for the event. The final two rounds were broadcast live on Fox Sports FS1, giving our hometown the chance to shine again with a strong spectator turnout.

“It’s a gem of a track that forces players to shape their tee shots and avoid being distracted by one of the most unique golf holes in the world—the No. 16 Flower Hole—one that is visually stunning as any you’ll find,” a Fox Sports commentator said.

Championship runner-up Jillian Bourdage, of Taramac, Florida, said, “This golf course was so spectacular, so beautiful. I believe everyone had a wonderful time playing on it.”

It had been 33 years since we last hosted a USGA championship—the first was the 1986 U.S. Women’s Amateur Public Links Championship.

“If I’m calling the shots at the United States Golf Association, I’m looking at the calendar today and figuring out how soon the organization can get another championship booked at SentryWorld,” said Gary D’Amato, senior writer for Wisconsin.Golf.

Learn more about our passion for golf, how we’re a company built on conversations and trust, and how we’re connected to the Maui community, home to the Sentry Tournament of Champions.