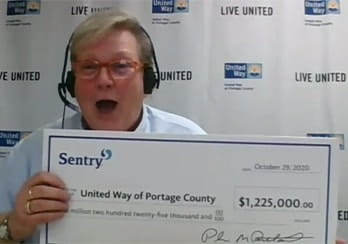 In Stevens Point, Wisconsin, where Sentry is based, the company and its employees topped a million dollars for the United Way of Portage County for a sixth straight year. Employees, most of whom are working remotely, came together to donate $1,225,000 to United Way of Portage County during its 75th year of existence in the community. The total, announced October 29 during a private virtual event, included employee pledges, virtual special events fundraising, and a matching donation from the foundation.

“We are continually amazed with the strength and fortitude shown by all Sentry associates in support of the communities where you live and work,” said Sue Wilcox, United Way of Portage County executive director (pictured above). “This year, with a vast majority of Sentry associates working remotely, both here and in communities all around the country, and in addition to the many obstacles your team faced in rewriting your campaign playbook in the midst of a pandemic—we could not be more proud of you. Each one of you is a gift.”

Sentry presented a $1,225,000 check October 29 to Wilcox during a virtual campaign coordinators’ celebration. Later, Sentry Chairman of the Board, President, and CEO Pete McPartland shared his thoughts on this year’s campaign.

“When faced with the challenge of raising funds through virtual events, Sentry employees rallied to conduct a spirited two-week campaign,” McPartland said. “Recognizing the need in our community runs especially deep this year, they also stepped up their personal giving to United Way. Their generous level of giving reflects their community mindfulness and the trust they have in the vitality and strength of Sentry, which they’ve helped build and maintain year after year.”

United Way of Portage County focuses on the most vulnerable populations in its communities through collaborations with 28 partner programs and two initiatives with an emphasis on education, financial stability, and health—the building blocks for a good quality of life and a strong community.

The annual Sentry United Way campaign first topped $1 million in 2015. With this year’s donation, Sentry employees and the Sentry Insurance Foundation have contributed more than $17.5 million to the United Way of Portage County since 2000.

In her comments, Wilcox quoted Stephen Hawking: “Hawking once said, ‘Intelligence is the ability to adapt to change.’ I believe this. It’s clear that you believe it too—because you live it. It’s also clear to me that you are some of the smartest and most generous people we could ever have as our friends—and as our champions” she said. “Please know that we love you and we thank you from the bottom of our hearts.”

About the Sentry Insurance Foundation

The Sentry Insurance Foundation is the philanthropic arm of Sentry. Funding priorities include education support, workforce development, United Way, and local organizations that work to improve and enhance the quality of life in the communities where we live and work.