Sentry recognized by Forbes and Fortune 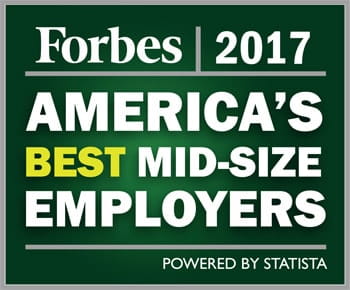 Forbes rated Sentry number 56 among America’s best midsize companies—those with fewer than five-thousand employees. To determine its list of America’s Best Employers, Forbes conducted an independent national survey of nearly 30,000 employees. Critical to the rankings was whether an employee was willing to recommend their employer as an exceptional place to work.

The Fortune ranking is based on total revenues. The company moved up 35 spots from its 2016 ranking and is up 79 spots from just two years ago. Sentry is one of 23 Wisconsin-based companies on the Fortune 1000 list, ranking No. 16 among state companies.

"We’re very pleased to be included on Forbes list of best employers. We’ve long believed that Sentry is one of the best places to work in America—this recognition affirms it,” said Pete McPartland, chairman of the board, president, and CEO. “At Sentry, we value our associates and the work they do for our customers."

Forbes’ survey asked respondents to consider more than 30 criteria. According to Forbes, among the companies that made the list, employees feel secure, understood, needed, and inspired.

"Our goal is to create an atmosphere where every associate can be excited about their work, be challenged, and can grow and learn,” said Jayne Petruska, vice president and chief human resources officer. “Being recognized by Forbes shows that our associates are passionate about their work and about Sentry."

About Sentry:
Sentry Insurance is one of the largest and most financially secure mutual insurance companies in the United States, holding an A+ (superior) rating from A.M. Best*. Sentry and its subsidiaries sell property and casualty insurance, life insurance, annuities, and retirement programs for business and individuals throughout the country. Headquartered in Stevens Point, Wisconsin, Sentry employs more than 4,000 associates in 41 states. See a complete list of underwriting companies.