KAPALUA, MAUI, HAWAII – Sentry, which has fully embraced its role as title sponsor of the Sentry Tournament of Champions since becoming the sponsor in 2018, has made an early commitment to a long-term extension, agreeing to continue the tournament and support to the Maui community through the 2029-30 PGA TOUR Season.

The new 10-year deal replaces the original five-year agreement, which was announced in August 2017. The announcement was made late Tuesday at the Plantation Course at Kapalua in advance of Thursday’s opening round of the winners-only Sentry Tournament of Champions, where Xander Schauffele will be defending his title. 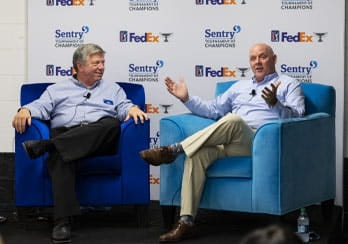 “On behalf of the PGA TOUR, thank you to Sentry Insurance for its long-term commitment to the Sentry Tournament of Champions and the betterment of the Maui community,” said Andy Pazder, PGA TOUR Chief Tournaments and Competitions Officer. “Sentry’s partnership has been integral in the tournament’s success in the last three years and we’re thrilled at today’s announcement that secures the PGA TOUR’s winners-only event for years to come.”

For Sentry, one of the largest business-focused mutual insurance companies in the United States, this represented its first major sports sponsorship. However, the company has been involved with golf since 1982 when it built SentryWorld, Wisconsin’s first destination golf facility located at its headquarters in Stevens Point, which most recently played host to the 71st U.S. Girls’ Junior.

“Extending our partnership with the PGA TOUR was an easy decision,” said Pete McPartland, Sentry’s chairman, president and CEO. “It has been an outstanding experience, helping us build our brand and affording us the opportunity to spend quality time with customers and business partners. What we’ve come to appreciate most about being the sponsor of the Sentry Tournament of Champions is the opportunity to fully engage in the Maui community and feel such a part of it ourselves. The many charities the tournament gives to has enabled us to get to know the Maui people and the community’s needs. With Sentry’s commitment to supporting the Tournament of Champions for the next decade, you can be assured that we will continue to work year-round to build community on this beautiful island and grow the charitable giving in ways that are truly impactful.”

Since becoming title sponsor, Sentry has strived to make a direct impact to the local community, including the establishment of the Sentry Scholars Program, which annually awards four scholarships between the University of Hawaii and a University of Hawaii community college to promote the importance of workforce development. In addition, Sentry supports the United Way wherever it does business, and this year will donate $25,000 to the Maui United Way to support education, income sustainability and health, adding to its $25,000 donation to the organization during last year’s tournament.

Sentry is extending its community outreach this year with two special days during tournament week. Wednesday has been designated Ohana Day, where Maui public schools are provided an incentive to encourage families to attend the Pro-Am, get player autographs and enjoy the day at Kapalua. Students have been asked to wear their school uniform or T-shirt to designate the school they represent. The day will feature a meet-and-greet with former major leaguer and Hawaii native Shane Victorino and a special ceremony honoring the Wailuku Little League World Series team. Rickie Fowler will also be doing some giveaways in the kids autograph area.

Aloha Friday will be celebrated at the tournament, as well. To welcome the weekend, fans, volunteers, players and television broadcasters are encouraged to participate in the local tradition by wearing Hawaiian-patterned clothing and, new this year, for every player who takes part, Sentry will donate $1,500 to local charities on that player’s behalf.

The increased community support has certainly been welcomed. “On behalf of the people of Maui County, we’re incredibly excited about this announcement and Sentry’s commitment to our community. We’re looking forward to this continued partnership as this spirit of supporting our community serves as a model for keeping Maui no ka oi,” said Maui County Mayor Mike Victorino.

But the Sentry connection to the Tournament of Champions isn’t limited to Hawaii. Sentry associates at Stevens Point will be encouraged to wear Aloha Friday attire, while Hawaiian music, golf games and the telecast on Golf Channel will permeate the headquarters, amidst the frigid Wisconsin winter.

The Tournament of Champions dates to 1953, when it was introduced at Las Vegas’ Desert Inn Country Club as an event for winners from the previous season. It remained at Desert Inn CC until 1967, when it moved to Stardust Country Club. The tournament moved from Las Vegas in 1969 to La Costa Country Club in Carlsbad, California, where it remained for 30 years before relocating to its current home at Kapalua Resort on the island of Maui. Troon Golf, which operates Kapalua, recently completed a $15 million renovation on the Plantation Course with original architects Bill Coore and Ben Crenshaw returning it to its roots.

As might be expected with a winners-only format, the Sentry Tournament of Champions has a rich history of champions, from World Golf Hall of Fame members to modern-day stars, as represented by just the past five winners: defending champion Schauffele, two-time champion Dustin Johnson (2018), Justin Thomas (2017), Jordan Spieth (2016) and Patrick Reed (2015).

The PGA TOUR, headquartered in Ponte Vedra Beach, Florida, co-sanctions more than 130 tournaments on the PGA TOUR, PGA TOUR Champions, Korn Ferry Tour, PGA TOUR Latinoamérica, Mackenzie Tour-PGA TOUR Canada and PGA TOUR Series-China. Members on the PGA TOUR represent the world’s best players, hailing from 28 countries and territories (93 members are from outside the United States). Worldwide, PGA TOUR tournaments are broadcast to 226 countries and territories in 23 languages. Virtually all tournaments are organized as non-profit organizations to maximize charitable giving. In 2018, tournaments across all Tours generated a record $190 million for local and national charitable organizations, bringing the all-time total to $2.84 billion.