Contributions to nonprofits top $7M since the event moved to Maui in 1999.

KAPALUA, Maui, Hawaii (June 16, 2020) – Tournament officials and representatives from Sentry Insurance announced via a virtual teleconference today that more than a dozen Maui nonprofit organizations benefitted from the 2020 Sentry Tournament of Champions, totaling more than $450,000 in total generated funds. 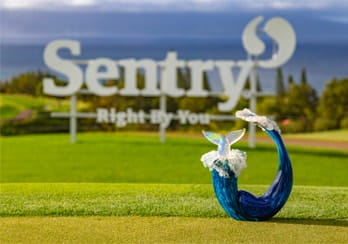 “This has been a challenging year for so many on Maui and around the world, and we are humbled and excited to be able to bring some good news to inspire some hope,” said Alex Urban, executive director of the Sentry Tournament of Champions. “On behalf of our players, sponsors, fans, volunteers, and everyone who loves this tournament, we are proud of the difference we can help inspire on this beautiful island. Our nonprofit partners help in so many areas of need, and we are grateful to be able to work alongside them.”

With this year’s donations, the tournament has generated a total of $7,089,694 for community charities since it moved to Maui in 1999.

The designated beneficiaries of the 2020 event were:

As part of their relationship with the tournament, these designated beneficiaries assisted in promoting the event, offsetting costs, providing volunteers, and much more.

In May, the Sentry Insurance Foundation donated $200,000 to Maui United Way, an organization helping address Maui’s most vital needs through the impact areas of education, income (sustainability), and health. As the title sponsor of the Sentry Tournament of Champions for the past three years, and through the 2029-30 PGA TOUR Season, Sentry has made a commitment to work year-round to build community on Maui and support the island’s charities.

“Just like Sentry’s hometown of Stevens Point, Wisconsin, Maui, too, is a small town in many respects,” Smith said. “Maui is home to hardworking people who look to community organizations to lift them up—especially during these uncertain times. We think of Maui as our home away from home and are grateful for the year-round opportunity to help support the people of Maui and the local charities that do such incredible work to serve their needs.”

Last year, Sentry Insurance implemented a scholarship program for Maui public high school students to attend the University of Hawaii and its affiliated Hawaii Community Colleges. Designed to promote local workforce development, when the program is fully implemented, 12 students will receive a Sentry scholarship each year.

As a thank you to Chris Berman, who lives on Maui for much of the year, for his assistance in promoting the Sentry Tournament of Champions, donations were also made to the Literacy Volunteers of Greater Waterbury, Connecticut, a favorite charity of Berman’s late wife.

The tournament also made a donation to Friends of the Pu’u Kukui Watershed Preserve, to help support their important environmental work that benefits all of Maui.

Several other local nonprofits also benefitted from the tournament, including: Maui Arts League, who was instrumental in the Lahaina Kickoff Event, The First Tee of Maui, Whale Trust, Hui O Wa’a Kaula, and the Maui Hotel and Lodge Association’s Charity Walk on behalf of the Westin Kaanapali.

The 2021 Sentry Tournament of Champions returns to The Plantation Course at Kapalua from January 7-10. All four competitive rounds will be broadcast on GOLF Channel. Fans are encouraged to follow the tournament on Facebook, Twitter, and Instagram to get updates and a behind-the-scenes look at the tournament preparations.

The PGA TOUR, headquartered in Ponte Vedra Beach, Florida, co-sanctions more than 130 tournaments on the PGA TOUR, PGA TOUR Champions, Korn Ferry Tour, PGA TOUR Latinoamérica, Mackenzie Tour-PGA TOUR Canada and PGA TOUR Series-China. Members on the PGA TOUR represent the world’s best players, hailing from 29 countries and territories (93 members are from outside the United States). Worldwide, PGA TOUR tournaments are broadcast to 212 countries and territories in 23 languages. Virtually all tournaments are organized as nonprofit organizations to maximize charitable giving. In 2019, tournaments across all Tours generated a record $204.3 million for local and national charitable organizations, bringing the all-time total to more than $3 billion.

Fans can follow the PGA TOUR on PGATOUR.COM, the No. 1 site in golf, on the PGA TOUR app and on social media channels, including Facebook, Instagram (in English, Spanish and Korean), LinkedIn, Twitter, WeChat, Weibo, Toutiao and Douyin.

Unsupported Browser
Warning, we have detected that you are running an unsupported browser. We recommend upgrading your browser or running on a different browser. In the meantime, this site may not operate completely.