More than 90% of Stevens Point employees contributed to the campaign

Sentry and its employees rallied to raise nearly $1.52 million for United Way during the mutual insurance company’s annual campaign.

In Stevens Point, Wisconsin, where Sentry is based, the company and its employees rallied to top a million dollars in support of United Way of Portage County for the fifth year in a row. This year’s record total of $1.215 million—announced November 7 at a private event in the Sentry Theater—included employee pledges, special events fundraising, and a matching donation from the Sentry Insurance Foundation. 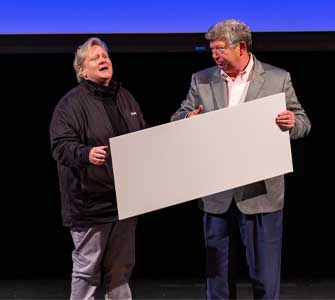 “This community has persevered for generations, always looking to reach out a hand to our most vulnerable populations,” said Sue Wilcox, United Way of Portage County Executive Director. “For many decades, Sentry and its employees have persevered and, in the words of Rollin Mabie, a community fundraiser from the 1940s, you should be proud of the unselfish work you do, and continue to do, on behalf of all of us.”

Sentry Chairman of the Board, President, and CEO Pete McPartland presented a $1.215 million check November 7 to Wilcox during a campaign coordinators’ celebration at the Sentry Theater.

“Our associates have a terrific time doing this campaign. Each year, they come up with new, inventive ways to help raise money,” McPartland said. “This contribution reflects their giving hearts and support of this great community.”

Said Saeger, “It’s our fellow associates who do the work that make the campaign so successful. This couldn’t happen without their investment of time and resources. I’m extremely proud of their efforts. They have all helped make a great impact on the people of Portage County.”

The 2019 Portage County contribution was a $15,000 increase over last year’s $1.2 million total. For the eighth year in a row, more than 90 percent of the company’s Stevens Point employees contributed to the campaign.

United Way of Portage County distributes the funds it collects to 30 partner programs and initiatives focused on improving the areas of education, financial stability, and health in the county.

Wilcox concluded her comments with a quote from Lao Tzu. “‘Kindness in words creates confidence. Kindness in thinking creates profoundness. Kindness in giving creates love,’” she said. “Thank you, Sentry!”

The annual Sentry United Way campaign first topped $1 million in 2015. With this year’s donation, Sentry Insurance and its employees have contributed more than $17 million to the United Way of Portage County since 2000.