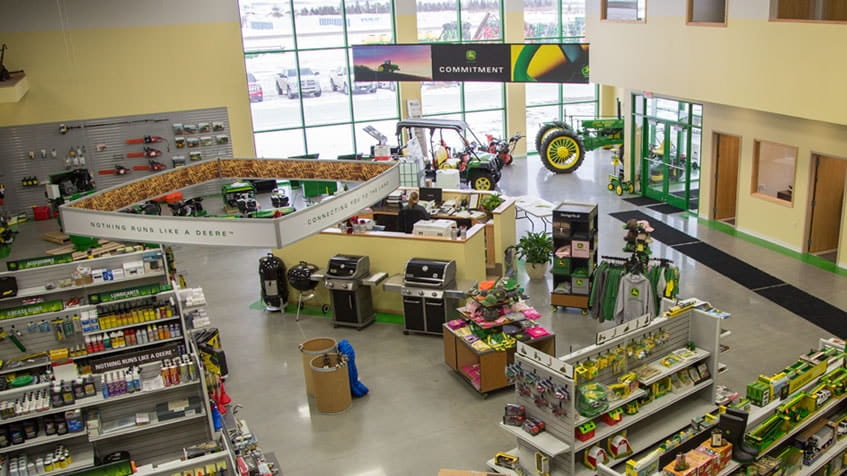 Tim, our Sentry adjuster, gave us great advice. What he said, we did. He was a pro.

When Barry Grossenburg drove away from his John Deere dealership the afternoon of October 4, 2013, he had no inkling that he’d return just hours later to find it destroyed by an EF4 tornado.

Two days after the storm passed, authorities deemed it safe for Barry to survey the destruction. It was a Sunday. Sentry general adjuster Tim Romero was there. Within hours, Romero issued Barry a check to rent a temporary facility nearby. Barry's policy included 12 months of lost income insurance. In the days and weeks to come, it helped get his business—parts, sales, and service—again serving customers.

When general adjuster Tim Romero witnessed for himself the destruction, he had a heart-to-heart with Barry Grossenburg and his team to gain an understanding of their needs.

He went over their policy’s benefits and explained the claims process. Mark Zabel, Grossenburg’s account manager, had done a great job of getting them the proper coverages, Romero said. “When you do that, it gives me as an adjuster a lot to work with.”

In the wake of the storm, Romero ensured there was a timely plan of action in place. Debris was removed. Inventory was taken. Equipment was appraised. Damage was assessed. Demolition soon followed. “The faster we can cut checks, the better off the insured is going to be,” he said. “In less than 40 days, we had this loss buttoned down to the point where we had already paid out $13 million.

Rebuilt in less than a year, bigger and better

By October of 2014—less than a year after the tornado struck—he moved his operations into the new Wayne dealership. He and his staff threw a grand reopening party on January 8, 2015. Sentry, which stood behind Grossenburg as it does all its dealerships, was there. Not only had Sentry ensured Grossenburg’s 25 employees would continue to have their livelihood, it saw to it that the dealership would be better positioned to serve its customers.

Two other implement dealerships in Wayne, Nebraska were damaged by the same storm, one as badly as Grossenburg. Neither were insured by Sentry and both took longer to recover.

We kept our promise.

EF4 Size of the tornado that devastated the dealership

With our building property coverage policies, you and your business are protected in case your building is damaged and requires repair or rebuilding.

Property damage shouldn’t result in lost income. With our business income insurance, we’ll help you get back to business as you recover from property damage.

Stop worrying if your company has enough liability coverage. Get extra protection with a business umbrella policy.

Living a culture of safety

Holmes Company of Jackson has built a culture of safety to ensure they have the most qualified truck drivers on the road.

Building trust in a new community

When LandMark Implement experienced a large fire at their newly acquired shop, getting their new employees back to work quickly was their top priority.

Recovering quickly from a devastating tornado

While others struggled to rebuild in the wake of a tornado, Barry Grossenburg was up and running within days and doing business from a new facility in a year.

Small businesses rely on personal touch as a factor in keeping customers. The same thing holds true for Sentry in providing insurance solutions for small businesses.

Kennametal reduced their average workers’ compensation claims from 300 to 75 per year with Sentry’s help.